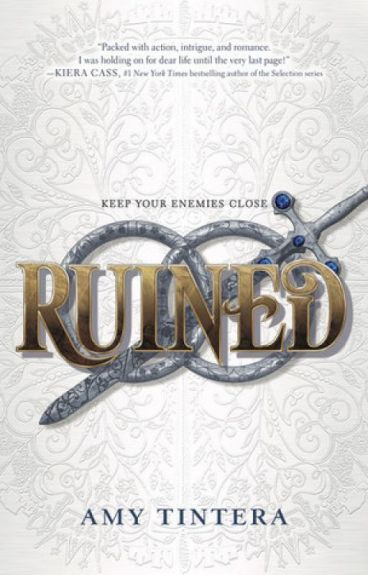 I received Ruined in my May FairyLoot box, and decided to catapult it up to the top of my TBR list for the pure reason that it seemed like a fast read and I was in the mood for quick fantasy. In that sense, Ruined did not disappoint.

Emelina Flores has nothing. Her home in Ruina has been ravaged by war; her parents were killed and her sister was kidnapped. Even though Em is only a useless Ruined—completely lacking any magic—she is determined to get revenge.

Her plan is simple: She will infiltrate the enemy’s kingdom, posing as the crown prince’s betrothed. She will lead an ambush. She will kill the king and everything he holds dear, including his son.

The closer Em gets to the prince, though, the more she questions her mission. Her rage-filled heart begins to soften. But with her life—and her family—on the line, love could be Em’s deadliest mistake.

There were a lot of elements in Ruined that were so crushingly familiar in YA fantasy: shallow battle scenes, swords and magic at odds, and the main one being a love that is sprung on the reader without a lot of build up. I don’t want to use the term insta-love in Ruined’s case because I think Amy Tintera did a good job of portraying that Emelina and her new husband did not have feelings for each other immediately. What I do mean though, is that once they finally decided they were developing emotions that weren’t ambivalent, there wasn’t anything to show the reader how that h 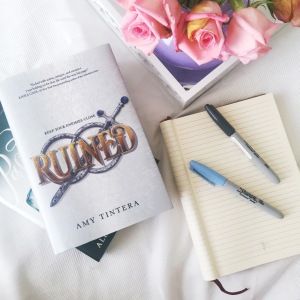 appened. When it came to developing relationships between all characters, not just Cas and Em, it was a tell-not-show scenario.

With that out of the way, I found Ruined to be way more of a high-octane book than I was originally expecting. I am usually not good with reading about subterfuge; I have relatively bad anxiety and it just makes my blood pressure shoot through the roof. The good news is, that Ruined didn’t drag out the build up. While Tintera really sets the pace of the book from page two, I only had to suffer for a little more than half way through the novel before the Emelina’s true identity was revealed and I could breathe easy.

“Mary swung at her again, and Em grabbed her wrist, yanking the arm with the dagger to the sky.

With her other hand, Em drove her sword into the princess’s chest.”

Yep, on page two our heroine Em kills a princess. And despite this act of cold blooded murder, I really liked Emelina. I thought she was a great, yet flawed main character. She was contradictingly protective and caring to her family and friends, but horribly cruel to her enemies. She was intelligent and confident, and gives up everything for the people of her kingdom even though they are kind of terrible to her, save for a few close friends. I do wish that Cas was a more developed character. I thought that it was interesting that half of the book was written from his point of view, but he wasn’t really fleshed out as a great character. I liked him for sure, but maybe because his family was so despicable and he wasn’t quite like them.

My main complaint with Ruined is that the lack of world building left me seriously wanting more. The Ruined as people were never really explained, and I just sort of picked up who they were and why they were hated so much as the story went along. There are all of these different kingdoms at war, but again, I am not really sure why. I believe this story is going to be a trilogy, and I think that is great, as I am hoping for more world building in the next book. I am eager to see Cas’s growth as a character, and I hope that his relationship with Em makes more sense going forward.

One thought on “Ruined”