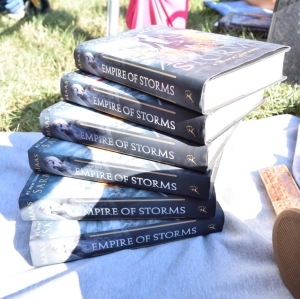 I have actually seen Sarah J. Maas before and gotten my copy of A Court and Mist and Fury signed when I went to BookCon in Chicago back in May of this year.  It was a pretty quick process: we got to chat with Sarah for about two minutes, she signed our books, and then we moved on so the line could continue to flow.

I left that signing thinking how adorable, kind, and funny Sarah was; just based on those two minutes of interacting.  So, when I saw that her US tour for Empire of Storms included Jackson, MS (only two hours away from my parents house) my sister and I decided that Queen Sarah was certainly worth that drive and bought tickets to the signing.

I will admit this was the first formal book signing that I have ever gone to, and I didn’t really know what to expect. Once we arrived, we learned that in addition to signing our copies of Empire of Storms (that we were given upon arrival and checking in), there was going to be a Q&A session that took place before!  I was super excited about this, mostly because I wanted to hear more of Sarah just talking and shooting nonsense at us, but also because it made the two+ hour drive to get to Jackson more rewarding.

However, while the signing was hosted by Lemuria Books, instead of occurring in the bookstore, the signing was located at this place called The Cedars.  The Cedars is  normally used as a wedding & wedding reception venue: it was a neat little house with a decent sized backyard, picturesque hanging lights, and beautiful oak trees.  But we had to wait outside. In early September. In the South.  Anyone mildly familiar with this scenario is cringing right now: it was absurdly hot, my friends.  And while we are all sitting outside on blankets and lawn chairs that we had brought from home, after waiting for over an hour we were all sweating pretty profusely by the time Sarah arrived.

Once the Q&A started though, the heat was forgotten.  Sarah is such a dork, but she is charismatic and charming. The first thing that she spoke about was Empire of Storms itself, the process of writing the book, and her favorite scenes to write (all non-spoilers of course).  She said if she could describe this behemoth in only three words, she would choose: “bloody, steamy, & emotionally-devastating”.  (As I have already finished the book, I am going to agree with this assessment.)

Many people were curious about how she outlines and plans for her books, especially when her novels have become so large.  She said that in regards to outlining, she is really non-traditional, and makes musical playlists outlines, instead of outlining chapter by chapter.  I thought this was super interesting, and also shows how creative of a person Sarah is; her right brain thriving off of musical movie scores and random snippets of songs.  Sarah also explained that there is a scene in EoS with Lysandra that she has envisioned of writing since she was 17. And, that this particular scene was inspired by the Pirates of the Caribbean soundtrack.  I can’t help but laugh at this, until I read the scene with the particular music in the background.  Good Lord. It’s perfect.  Can you imagine having something in your head that long though?! I am continually amazed by her. 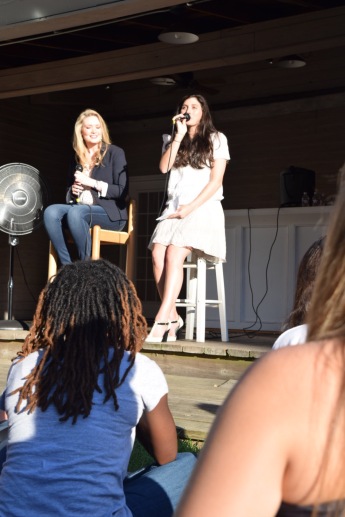 Both the moderator and SJM tried to steer the conversation away from Empire of Storms though, so Sarah started chatting about her love of Star Wars, Alien, and historical romance novels.  Again, let me reiterate she is a total dork.  When she laughs, she actually cackles, but she is infectious and I found myself wanting to rewatch all of her favorite movies and reread her favorite books.  She inspired this nostalgia in me for The Force Awakens, Lord of the Rings, ET, Pirates of the Caribbean, Outlander and so many more.

I could probably sit here all night and talk about all of the cool things that were discussed in that 50 minutes before the actual signing, but for the sake of your attention span I will begrudgingly bullet list the rest:

When the questions finally wrapped up the Lemuria Books workers took Sarah back to a room inside the house to get her set up for the actual book signing process.  They called people in based off of groups that were assigned to us when we first arrived, and since my sister and I had gotten there early enough, we were in the A group.  Which worked out perfectly because I don’t think I could have lasted even another twenty minutes outside in the humidity…

Once we got inside (and finally stopped drowning in humidity) we saw a huge table of books that Sarah had already signed, in addition to all the books she was about to sign as well!  This doesn’t have anything to do with anything but i just wanted to point out how awesome she is…

The line moved kind of slow but it didn’t bother us: people were taking a little bit more time with Sarah as she was signing their books.  I heard some people sharing inspirational stories, telling jokes, and exchanging presents.

My sister and I were actually one of the people to put together a present for Sarah before we got there.  I had gone to Barnes & Noble and bought a moleskin notebook, which we then filled with all of our favorite animal Instagram accounts that we follow.  (Do you all follow some amazing animal accounts?  I am obsessed!). We organized them by species and then by breed, and overall had a great time putting it together.   It seemed like Sarah really liked it, or at least thought it was hilarious.  For those of you that don’t know she is a huge animal fan, so this wasn’t just some random weird thing… Her agent even piped in and said that she was going to borrow it and find some new accounts to follow for herself, which was pretty funny.

Once our books were signed, and the extras that we brought stamped, there was no need to linger so we headed off for 2 1/2 hour drive home.  Before we left we got to sign Sarah’s first edition copy of Throne of Glass, that she brings to all of her signings.  There were thousands of signatures in it, and we struggled to find somewhere to squeeze our names in, but it was so sweet that she involves her fans like that.

Overall it was a quick trip to Jackson but totally worth it.  I also decided that I am probably going to attend any signing that Sarah has for all her remaining books, no matter how far I have to drive.  Long reign Queen Sarah!