I guess I should start of this review by saying that Empire of Storms is/was probably my most anticipated release for 2016.  So, with that being said, I think I should review this book from the inside out:

When the cover was revealed back in May, I was in awe.  I love the attention to detail: Aelin’s hair is growing back and the cover reflects that. She is also wielding Damaris, her fire is controlled and gorgeous, and the Eye of Elena is around her neck.  Then, as if her sassy travelling/fighting outfit isn’t enough, flip the book over and she is wearing a gorgeous open-backed purple dress that shows off her tattoos.  It is amazing how psyched the outside of this book makes me.

Bloomsbury also published this book on thinner pages, since the story is so long: 693 pages long to be exact.  The thinner pages actually make the book deceivingly heavy, like it’s a dense little brick, but I like that it’s not larger than Queen of Shadows physically.  I loved the feel of these thinner pages, and I found myself almost petting them at times.  I have heard some people said they experienced easily ripped pages because of thinness, but I didn’t personally have that problem.  Aesthetically, I think it looks lovely the size of the physical books vary throughout the series, rather than just moving from smaller to larger.  Also, it should be briefly noted that the Throne of Glass chapter headers, give me life. Ok, moving on. 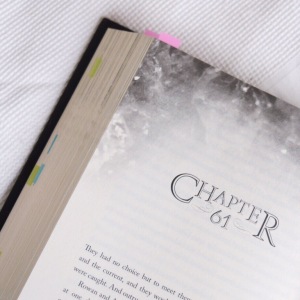 Finally, as the last stop on our tour around the physical book, before we get to the reviewing meat that is, let’s address the exclusiveness of all the different copies of Empire of Storms.  Two months ago when all of the different copies were announced, I swore I wasn’t going to buy into the capitalist BS that Bloomsbury was pulling.  Now don’t get me wrong, I have no problem with exclusive copies of books, but what I did have a problem with was the 4-5 exclusive copies.  It seemed a bit overkill, and honestly, sort of a money grab, which is silly considering how many people were already planning on reading this.  But even after complaining about ‘the man’, I still ended up purchasing both the Barnes & Noble exclusive copy, with the fan art end pages AND the Target exclusive copy, with the fan art dust jacket.  I ended up creating this ultimate copy of Empire of Storms, and I have zero regrets.  I probably spent about 50 dollars on this one book, but the fan art is life.  Seriously, look at this.  Gorgeous.

The long path to the throne has only just begun for Aelin Galathynius. Loyalties have been broken and bought, friends have been lost and gained, and those who possess magic find themselves at odds with those who don’t.

As the kingdoms of Erilea fracture around her, enemies must become allies if Aelin is to keep those she loves from falling to the dark forces poised to claim her world. With war looming on all horizons, the only chance for salvation lies in a desperate quest that may mark the end of everything Aelin holds dear.

To be honest, copying that summary from Goodreads to paste into this blog post was the first time I had actually read the actual summary… But the plot of this series has gotten so big, that I have found myself getting lost in it.  And honestly, this is going to be my only complaint about Empire of Storms.  There is so much going on, there are so many different pieces to the overall story, that it is a tad bit overwhelming.  I normally never have to reread previous books in a series to prepare for the new release, but I think it would have been wise of me to do so in this case.

Each book in the Throne of Glass series has been so unknowingly important to what is going to unfold in book six, yet when you lay them all out next to each other plot wise, you would never have thought that Throne of Glass and Empire of Storms would even be in the same series.  I like to think of the books as concentric circles, all emanating out from Throne of Glass, with each new book making the circle larger, each one throwing out the scope of characters and places that you encounter.  Empire of Storms is overwhelming because it brings all of the stuff we have read about back to one story. In a possibly terrible analogy, I am going to compare this book to an end of the year exam, a cumulative almost climax of everything we have learned thus far.

And while the plot has only gotten more expansive and complex, so has the large cast of characters.  Aelin, who is supposed to be our protagonist, didn’t command a majority of this book.  There were A LOT of different point of views that strung the story together, and with that being said, it worked.  The story is cast over an entire continent, and I loved going from POV to POV, piecing together all of the events that were occurring simultaneously.  Because there is so much going on, I would even make the argument that while Aelin may be the most important player in this extremely confusing game of chess, she isn’t the main one.  Rather, there are no “main” characters, but instead a great cast of secondary characters that all play their own important roles to the overall plot.

So, a brief and possibly condemning confession to make: I was never a huge fan of Aelin and Rowan.  I accepted Rowan, and found myself wishing that they were still strictly platonic while I was reading Queen of Shadows.  However, this book…. changed my mind.  I won’t get into any fights defending their relationship, and they most certainly are not my favorite literary couple, but I closed the book content with them as a pair.  Queen Sarah has made me accept the RowAelin ship, and I am now with that.

But Rowan and Aelin’s relationship isn’t the only one worth noting.  In fact, there are so many amazing relationships that emerge and are fostered throughout this epic 693 monster, that I really don’t know if I could pick a favorite.  And I am not just referring to romantic relationships.  Lysandra and Aelin are actual best friends that I can feel and relate to.  Manon and Aelin are opposite sides to the same coin, and I love their dynamic.  I never realized how much I needed Dorian and Rowan interacting in my life, until their brief time together was over.  I love how real all of these people feel, interacting and loving and hating and fighting… SJM is just a master writer.

Before I wrap up this behemoth of a review, I feel like I need to put in my two cents on the mature content that was included in EoS, given how much of a stir it caused before the book was even released.  So, I will just come right out and say it: in my opinion, the sex scenes are fine, great even.  I had absolutely zero problem with either of them (yes, you read that right, only two!) and in comparison to ACOMAF, I didn’t think they were even that graphic.  I know it sounds silly but I am really glad that Aelin didn’t get both sex scenes, in fact the one that isn’t Aelin and Rowan was one of my favorite scenes in the entire book.

At the SJM signing I went to last Thursday, Sarah talks about how she thinks it would be unreasonable to have her characters subjected to all this violence and death, but not allow them to have some sort of sexy time.  And I completely agree with this sentiment.  Sex is a part of life, and kids are engaging in sex younger and younger all the time (I don’t condone this, but it’s a fact).  To pretend that it doesn’t happen is absurd.  The people who have a problem with the sexual content need to merely skip over it, it’s only 6 pages out of 693.  I personally won’t though, it helps me strengthen character relationships in my head, plus I like to read about some sexy action now and again. 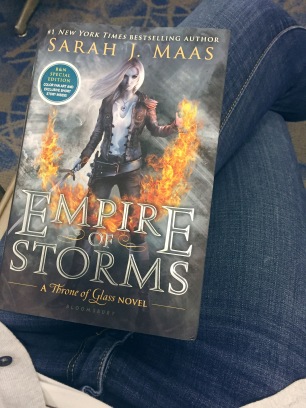 Okay, I really am going to start wrapping this up, I’ve gone on just a bit too long.  This series reminds me a little bit of Harry Potter: not in content, god no, but rather in how smart Sarah J. Maas is proving to be in her storytelling.  She was quietly and subtlety laying the foundation for Empire of Storms and book 6 since the beginning.  It was completely unnerving to be slapped in the face and the feels by something in Empire of Storms, only to realize that it was put into motion back in Crown of Midnight or Heir of Fire. Sarah is some sort of oracle or magician, I haven’t yet decided.

While I know I am going to go back and reread this entire series, particularly some of my favorite scenes which I won’t share since this is a mostly spoiler free review, I think I will skip the ending of this book.  Good.  God.  The ending is legitimately heartbreaking.  I have been torn apart by books before, but the utter sense of despair I felt at Empire of Storms is almost incomprehensible.  And to think I was scared about how this book would turn out…What the hell is going to happen in book 6?!

I loved this book, 5 beautiful, tragic stars. I will leave you with one thought though: Maeve can legit fuck off.

4 thoughts on “Empire of Storms”